Mistress Morgan was mad at her boyfriend for something he had done. He begged her to forgive him and promised to do anything to make things right with her. She smiled and liked what she heard. She took him up on his offer and made him lick her stinky and sweaty socks as punishment. He had said he would do anything and he was forced to lick and smell her stinky and sweaty socks.

This mistress had not punished her slave in a while and he had began to behave badly. He had forgotten how painful her punishments were and how he used to beg her not to punish her promising to change on his own. She enumerated all his mistakes and he knew he was in deep shit. She took him to the toilet and she forced him to lick the toilet bowl as punishment.

Mistress Gaia wanted her slave to know his place in her house. He was new but hew as behaving as if he co-owned the house with her. She did not like that attitude and she had to put him in his place. she decided to choke him but first of all she tied him up so that she could render him helpless. Then she choked him and told him if he did not change his manners, she could damage him completely. He was terrified and he changed.

Mistress Martina crushes slave for talking back at her

Mistress Martina did not appreciate her slave talking back at her. She pounced on him, ripped his shirt off and she trampled him cruelly. She used her high heels and later removed them to punish him using her bare feet. She did not care how much pain he felt. All she cared about was that he would never talk back at her ever again. He never did after that punishment.

Madame Marissa waited for a long time before her slave opened the door for her. Her slave had slept while he knew what time she got home and that she did not have a spare key. She punished him for wasting her time and for making her wait to get into her own house. She forced him to lick the soles of her dirty soles before she let him go with a warning.

Miss Jessica is a cruel mistress. She likes to punish her slaves even for small mistakes. Her slave had pissed her off for chewing his food loudly. She was pissed and as punishment, she used her boots to trample his face. She also had him lick the soles of her boots before she stomped on him with them. She facesat on him and farted on his face before she felt it was enough.

Mistress BlackDiamoond hung her aaccountant upside down and punished him cruelly. She had discovered he was embezzling funds from her company and she did not want to hand him to the authorities. She tied a strip to his nipples and she pulled it hard and enjoyed as he cried in pain. She then hit his balls and his dick and she did it repeatedly. He was tied up and could not offer any resistance.

Mistress Maria gave her slave instructions on what to do but he did not follow them and she was pissed. She had to punish him and she used her spit to do it. She spat into his mouth but she felt it was not enough. She rode him like a horse and she kept slapping him to move faster and punctuating it with spitting in his mouth and making him swallow.

This mistress had a hunch that it was this guy who had ordered a hack to her business. She investigated and when she found out the truth, she confronted him and she beat him up as revenge for what he had done. She wanted him to feel as much pain as she could possibly inflict and she achieved it by trampling him and kicking him hard in the balls and on his dick.

Miss Lindsey was reading a book and she did not want any disturbance. She knew her slave was excited since his team had won but she did not want to hear any of it. So she humiliated him to make him shut up. The minute he began to talk to her, she made him lie down and lick her socks as she went on reading her book as if nothing was happening. 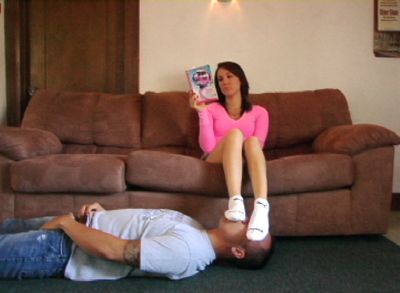